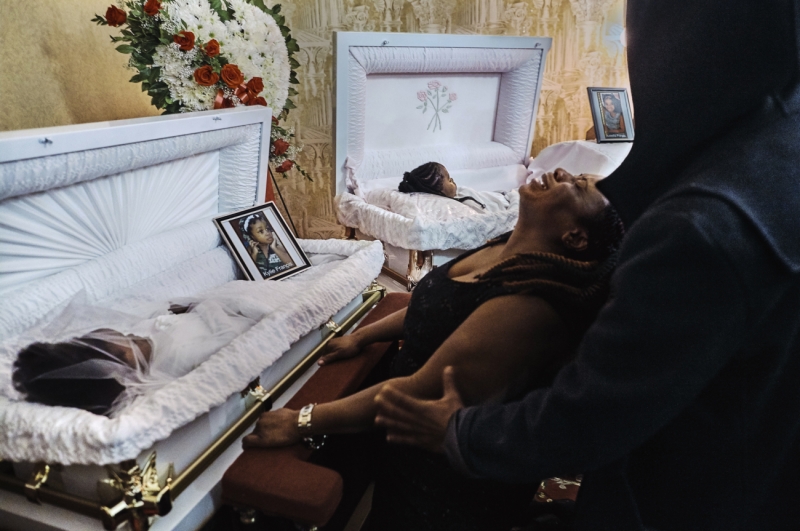 Shevan Stewart cries next to the dead bodies of her nieces, Kylie Francis, 2, left, and Kelesha &quot;Kelly&quot; Francis, top, that rest inside coffins during a funeral of the Bronx fire victims Karen Stewart Francis' family, on Monday, Jan. 8, 2018, in New York. 13 people were killed, four of the dead were children, when a fire rushed through a apartment building in the Bronx the cityâ€™s poorest borough. The tragedy highlights the reality of the housing inequality in one of the richest cities in the world were poor families lived in old buildings with safety violations that are unequipped with the latest in life-saving apparatus, and face the stresses of family life that can lead to a child care deficiencies. New York City's deadliest residential fire in decades in Bronx was accidentally lit by an unattended boy playing with the burners on his mother's stove. The 3Â½-year-old-boy, his mother and another child were able to flee their first-floor apartment. But they left the apartment door open behind them that did not self closed, and it acted like a chimney that drew smoke and flames into a stairwell. From there, the fire spread throughout the five-story building. The 26-unit apartment building was required to have self-closing doors, which swing shut on their own to keep fires from spreading . The building had six open violations, including one for a broken smoke detector in a first-floor apartment, according to city records and no self-closing doors. The Victims and family of the victims filed suits against the landlord for failing to maintain and inspect the property resulting in a series of mishaps, including faulty smoke detectors, rusty fire escape ladders that were difficult to lower, and a frozen fire hydrant outside of the building that forced firefighters to route a hose around the block to another hydrant. New Yorkers have limited well maintained affordable options for housing and have to spend an unacceptably high share of their income just to put a roof over their heads, which means having too little left over for other basic needs.