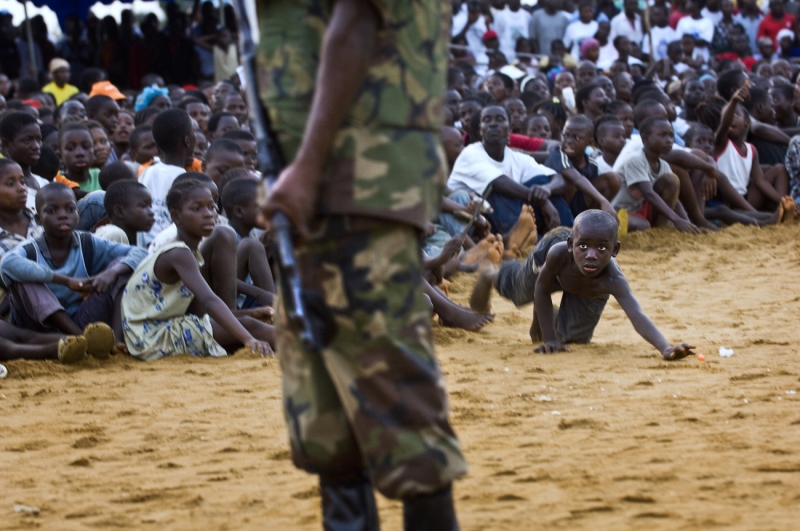 One of the charities that I support is International Alert, a peace-building organisation that works with people directly affected by conflict to build lasting peace. I was asked to document their work in Liberia, where they had been working since 1993. Liberia, and the Mano River Region in West Africa more broadly, had experienced civil war for many years, and International Alert supported various programmes to build stability and long-term peace. These included community radio stations, dialogues between local leaders, initiatives to promote greater security and a political voice for women, and festivals to celebrate peaceful co-existence and mutual respect between the different cultures of the region. The festivals attract an audience from far and wide, with an attendance that grew rapidly from year to year. These festivals brought together people from the regionâ€™s many diverse ethnic groups, providing a wonderful opportunity to re-establish harmony between different cultures: diversity in unity, and unity in diversity. At this particular three-day festival on the outskirts of Monrovia in 2008,the crowd was tens of thousands strong. I was interested in photographing the people attending and the West African peacekeeping troops who were keeping order, as well as the performances themselves. With any subject, I observe what is happening whilst trying to determine how I can best show what is front of me. However, sometimes I am so immersed in seeing how to frame the picture and capture the moment that I am unaware of everything else. I started by photographing the soldiers, but then changed to what was more interesting in the crowd. I had been circling this particular soldier, when I sensed something happening behind. Suddenly out of the crowd leaned this boy reaching for his precious ball. This was a child who had grown up in war, and had good reason to be scared of soldiers and their guns. He wanted to get his ball back, but his eyes were fixed on the soldier. This all happened in the blink of an eye and resulted in this picture, which seems to represent the precariousness of peace, as seen through the eyes of a young child with little understanding of the greater dynamics at play. All he knew was, he wanted his ball back, but also to stay safe.